The human voice is perhaps the most prevailing tool in history. For every devastatingly powerful weapon set to launch, there stands a voice of reason encouraging and often succeeding in its neutralization. During the late 1920s and 1930s, Father Charles Coughlin was this voice of reason. 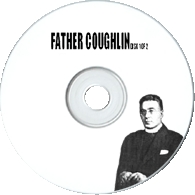 Father Coughlin's radio shows were the most popular of the era, and he has since been referred to as the "Father of Talk Radio." Through Father Coughlin's Radio Broadcasts, he taught strong faith through God, healing through family, and togetherness as a country. In a time when most thought the dream of America would awake to extinction, Coughlin remained confident that people had the strength to persevere.

The blowhard, celebrity-starved talk show hosts of today simply do not compare with the honest and heartfelt approach Coughlin took in a bygone era. Through the Old Time Radio Catalog, you have the opportunity to hear the man speak.

OTRCat.com delivers rare and vintage broadcasts direct from Father Coughlin's popular radio program. Although the better part of a century has passed us by, his words still ring true for America today. Be a part of history by getting to know history with classic recordings from the original king of media: Father Charles Coughlin.