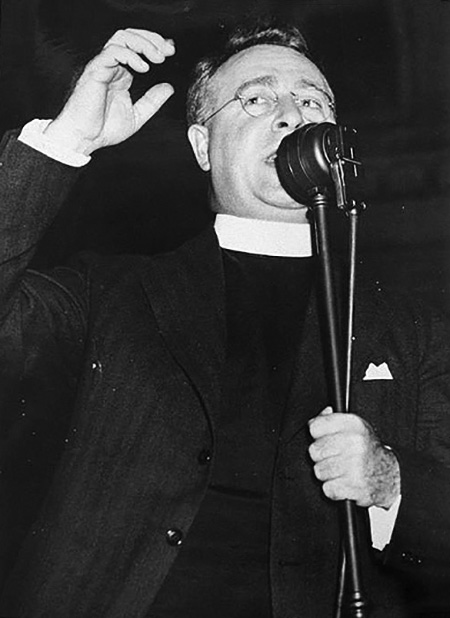 "I have dedicated my life to fight against the heinous rottenness of modern capitalism because it robs the laborer of this world's goods. But blow for blow I shall strike against Communism, because it robs us of the next world's happiness."

"While we sympathize with the Serbian or the Russian, with the Jew in Germany or the Christian in Russia, the major portion of our sympathy is extended to our dispossessed farmer, our disconsolate laborers who are being crushed at this moment while the spirit of internationalism runs rampant in the corridors of the Capitol, hoping to participate in setting the world aright while chaos clamors at our doors."

"The people have spoken and the only American thing to do is abide by the will of the people."

"We shall barter our sovereignty as a free, independent nation or accept the decisions of a World Court as a super-nation to manage our affairs."

"Oh you poor laborers and farmers, we have tried, time and again, to tell you that there can be no resurrection for America until Congress begins to coin and regulate the value money. We have endeavored to teach you, time and again, that there can be no coming out of this depression until what you earn goes to sustain your wife and your children."

"Less care for internationalism and more concern for national prosperity."

"Must the entire world go to war for 600,000 Jews in Germany who are neither American, nor French, nor English citizens, but citizens of Germany?"

"If Jews persist in supporting communism directly or indirectly, that will be regrettable. By their failure to use the press, the radio and the banking house, where they stand so prominently, to fight communism as vigorously as they Nazism, the Jews invite the charge of being supporters of communism."

"From European entanglements, from Nazism, communism and their future wars, America must stand aloof. Keep America safe for Americans and the Stars and Stripes the defender of God."

"When we get through with the Jews in America, they'll think the treatment they received in Germany was nothing."

"Jewish persecution only followed after Christians first were persecuted."

"Roosevelt has a poor brand of Russian communism … I think it is significant the leaders among the communists of the world never once attacked international bankers. Roosevelt will not touch that subject."

"The great liar and betrayer…"

"The New Deal is Christ's deal."

"If Congress fails to back up the President in his monetary program, I predict a revolution in this country which will make the French Revolution look silly."

"On this earth you must belong to the church militant or get the hell out of it. That's the right word. You're either with me or against me. There is no middle ground in this battle between Christ and the anti-Christ. If you step out of (the battle), you're worse than those boys who ran off to Norway, Sweden, those boys who deserted the government. You're deserters, rotten deserters."

"I need not recall for you that both the laboring and agricultural classes of America are forced to work for less than a living wage while the owners of industry boastfully proclaim that their profits are increasing."

"I believe that when a banker speaks, you can go the opposite way and be right. That has been proved in recent years."