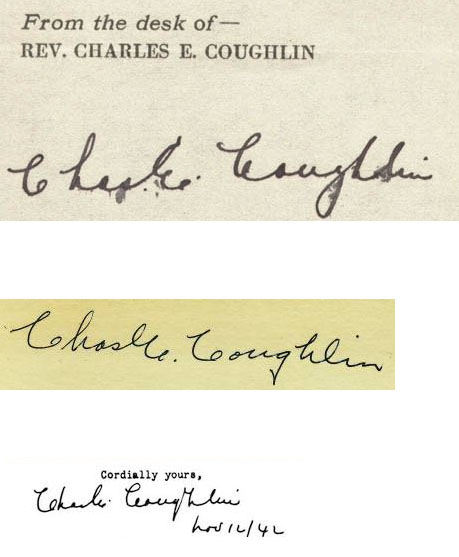 Here is my analysis based on Fr. Coughlin's 3 signatures... The bottom signature is dated 1942 but no dates for the other two but the writing is slightly different in the 3 samples.

The top signature has broader lines giving the impression the pen tip may have been a flat tipped ink pen. It shows an intelligent person who took great pride in his work almost to "excess" with vanity traits. He wanted to be noticed! He was quick to pick information up, analytical, yet he did not have to spend a lot of time analyzing facts. His intuition would carry him far after getting a sufficient grasp of information.

Father Coughlin was people oriented who liked socialization as well as the finer things of life. His pride and convictions in what he was preaching shielded him from detractors and people who thought of him being too extreme. In other words he didn't care if some people did not care for his extreme viewpoints. He was very frank in his viewpoints and held nothing back.

The middle signature shows indications that things may not have been going his way. Not knowing the date of it, It does show some depression setting in with his life especially when U. S. agents were on top of him! This also could be from exhaustion. US authorities were suspicious of his personal philosophy of pro Nazi and pro fascist leanings. This signature shows he is open to listening to other opinions and this could have been when he seemed to agree with Hitler and Fascism concerning the European Jews. This signature also indicates he is becoming a bit more private probably because FDR abandoned him and he is no longer in the lime light as much as he would like.

Once again, not having a date for this signature I am surmising some of these incidences. Nevertheless, his personality is beginning to change here and it is not quite the same.

The bottom signature shows some change in his thinking and strategizing. Some aggressiveness plays out here and he is not the most tolerant person. His personal outlook seems to be constrained and probably becomes agitated more than he used to be. .However, By this date he was told to cease and desist his work. The FBI had "raided him."

All in all, Fr. Coughlin was a very colorful personality. He studied with the Basilian Fathers at the beginning of the century and they were very conservative especially when they viewed the banking and capitalist system as being at the root of society's problems. He became a diocesan priest in Michigan during the 20's and he was able to do pretty much what he wanted as far as radio work, preaching anti capitalism in some areas. If he stayed with the Basilian order he probably would not have been "allowed" to carry forth.

These are my opinions of his personality just from the 3 signatures. A main body of writing such as a letter hand written would have helped.

Just one more point, when you see the first and last names of a signature about the same size then that person puts "equal weight" with himself as an individual as well as his family background. This is seen with his signatures.

When the first name in a signature is larger than the last name or surname, then he/she values themselves more as an individual and more prominent than the family name.

When the last name is more predominant, the family is more important and they may not consider themselves as strong.

Thanks for the opportunity to study these signatures. I am fascinated with anything to do with the 1930's. I teach Economics in a 2 year College in Massachusetts and I love telling stories about it and how some of the current economic problems are dejavu! I was born towards the end of the era, 1939, but I remember my father talking about it way back and saying how "nobody had 2 quarters to rub together!"