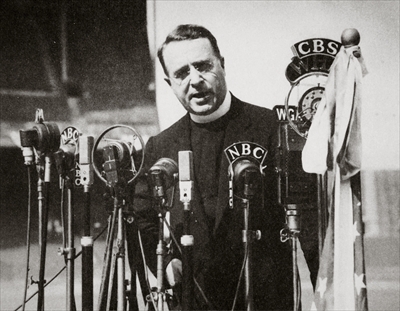 Throughout history, there has been no greater example of the power of radio than Father Charles Coughlin's radio show of the Depression-Era 1900s. Although his show started as a weekly sermon, touching on aspects of God and family and mostly catering to children and young adults, it quickly became evident that Coughlin had a mind for politics, and a tongue without a filter. He began expressing forward views on America's social reform.

Coughlin was outspoken against many atrocities in his own country – including the Ku Klux Klan. The KKK planned to "punish" Coughlin for his brazen speech – but it was the Soviet Union that bore the brunt of the Father's fury. Coughlin stated that the communist government had purposely made a divorce easy and that this idea of an anti-family was quickly making its way to the states. He referred to this as the "Bolshevism of America."